The train ride from Florence to Naples was great.  However once we hopped in a cab to get to the water ferry, we were scared for our lives.  Naples was super sketchy and we kind of felt like we might get robbed.  But once we were at the dock for the ferry we made friends with another couple that was from North or South Carolina and they felt like we did!  A tip for fellow travelers wanting to go to Capri - go through Sorrento and not Naples!  After about an hour we were in Capri!  It was beautiful! Capri is a crazy island that is steep and full of hills and cobblestone.  So we had the hotel porter take our luggage to the hotel.  Here we stayed at Hotel La Residenza. The views from the hotel are crazy amazing but the hotel is not all that great, I would not really recommend it.  The streets of Capri are small and winding and like Venice there are not many cars.  There are a few attractions here but most of the island is built for relaxing and taking in the scenery.  We were starving when we got in so we quickly set up a reservation at a restaurant that was recommended in my guide book!  So we were off to Aurora, a place well known for stars dining there such as Mariah Carey, Beyonce and Jay-Z, and several more!  Needless to stay it was amazing!  We started with the Capresse salad and a bottle of Chianti Riserva, the capresse salad was invented on the island so we had to have one!  For the main course we had the steak with balsamic and Parmesan and the lobster linguine. We splurged and had the Chocolate torte for dinner. After dinner we went back to our hotel and sat on our balcony with a bottle of wine and took in the gorgeous view. 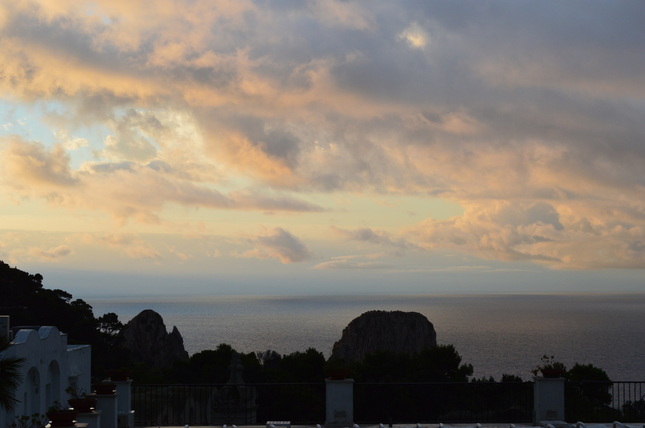 View From Our Hotel
October 7, 2013
Wandering the Island

There were no plans today!!  So we decided to go shopping!  Frommer's guide book had several places to go that are unique to the island!  We started out in search of the recommended shops!  We found Carthusia, one of the oldest perfumeries in the whole world, founded in 1618 by monks, so we picked up a bottle for Rachel.  Then we found Capri Watch, where Jonathon found a watch he really wanted. Then we found our favorite store Scarnetto's where Jackie O had shopped on her many vacations here. He had a huge collection of shoes in a teeny tiny shop!  Rachel found 2 pairs of sandals and Jonathon also found 2 pairs of loafers. Down the road we found the place where they invented Lemonchello so we bought a bottle.  Then we continued wandering and found the wine shop of the restaurant we ate at last night and bottle a couple more bottles of wine.   After a day of shopping we settled in at a place on the main square and had couple of paninis.  Then headed out to the Augustus Gardens.   The view was unreal!!

For dinner Rachel used TripAdvisor and found a highly rated restaurant called Paulino Lemontrees.  This was very much out of the way however quite charming. It was all outdoors and everything on the menu had lemons in it!  We ordered Calamari and it was as big as an onion ring!!  That was super impressive and we also had the ravioli in lemon sauce!  Very different menu and very good place to eat! 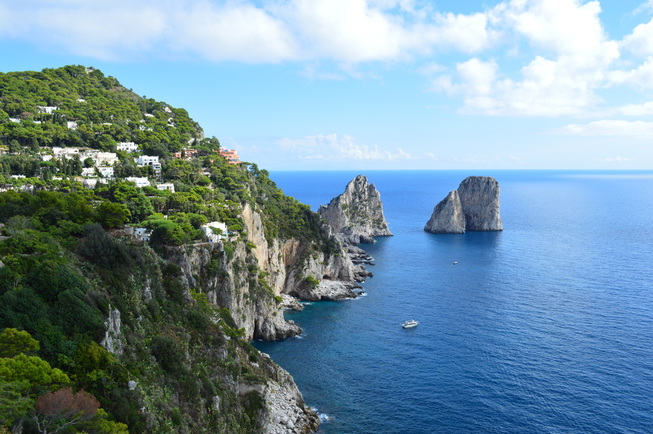 View From Augustus Garden
October 8, 2013
To Rome We Go

The last morning in Capri we went souvenir shopping and picked up some balsamic vinegar, wine, and honey.  Then it was time to trek with our luggage to the main marina.  Note - Pack Light!!! 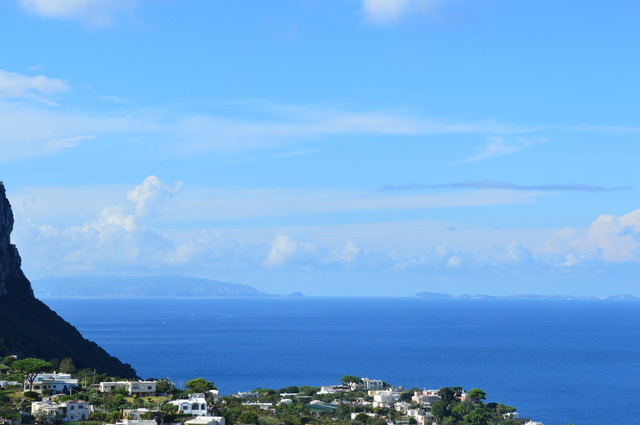 Other Side of Capri
Powered by