We caught a flight from DFW to Chicago and had a short 2 hour layover then it was on to the plane for Italy.  We were in air for 9 hours, served 3 meals and got about 2 hours of sleep!  And then before you know it we landed in Rome, from Rome we had a town car take us from the Airport to the Train Station, these transfers were something that came very handy and we are glad that we used AAA to help make our travel arrangements.  Because being in a foreign country is a little scary, not knowing what you are doing or where you are going!  So when we got to the train station we grabbed a piece of Pizza from a deli/cafeteria!  Then we went to find our "Terminal."  The train ride that we were on from Rome to Venice took about 6 hours.  We were very lucky to be in a 1st class coach on the  iTalio train company, it was very nice, so nice in fact we crashed hard for a couple of hours!


Once we got to our hotel, Hotel Kette, we had to get cleaned up!  We spent about 24 hours in the same clothes and that kinda grossed us out!  We were also pretty tired and it was kinda late when we got in.  So we went to dinner at a near by restaurant, da Raffaele, we ordered a bottle of Chianti and I had the Spaghetti Cabonara, which was amazing, and Jonathon had the Gorgonzola Tortellini!  Very good restaurant, we would definitely recommend it to others!! 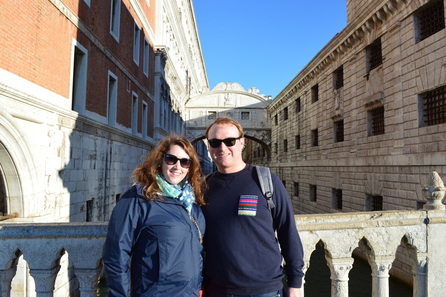 This day we woke up and got ready for our tour of Doge's Palace with Secret Itineraries, this particular tour was recommended by one of our Italian Guide books.  We went down to the complementary breakfast that our hotel had.  We were kind of surprised by their assortment of food.  They had a wide spread of deli meat, cheese, croissants, and boiled eggs.   They also had some of the most delicious coffee, served in the form of Espresso or Cappuccino!  I usually opted for the cappuccino while Jonathon took the espresso!  I can not tell you enough about how good the coffee in Italy was!!  Fair warning though, if you order a "coffee" you are most likely going to end up with a shot of Espresso!

Once we were done with breakfast it was off to our tour!  We found out that our hotel is about 3 minutes from St Mark's Piazza, which is the main square of Venice!  So our hotel was in a great central location!  We then went on a walking tour of Doge's Palace.  This tour was spectacular, it took us into all the hidden spots of Doge's Palace, we saw where Casanova was held as a prisoner and even escaped! It took us into the torture chambers of the palace, and more!  All in all it was our favorite tour we took while we were in Italy - highly recommend it!

After the tour it was time for some lunch, so we of course grabbed Pizza, so we split a Spicy Salami pizza from a restaurant near our hotel!  Then that evening we had another tour and gondola ride.  We decided to dress up for this, because we decided to enjoy a nice dinner after the tour!  On this tour we walked through Dulsodoro, which was a neighbor hood of Venice that we spent a lot of time in!  We walked to the very tip of one of the islands.  It was a spectacular view especially at night!  After the walking tour it was onto the Gondola ride!  We loved this part - the gondola's are extremely unstable, yet romantic and somehow we managed to ride the gondola with another couple from Texas.

Then it was time for dinner, we ended up going to La Cafe, on the Stefano Square!  I ordered the Gnocchi, which was my first time to ever have it and it was so good!  Jonathon ordered the Lasagna Bolognese.  We also decided to splurge and order some dessert so we had Tiramissu and a cannoli!  I must say, I think that cannoli is better in the USA, in Italy they are served cold, and with some sort of  gummy in them, we were not impressed!

When we got back to our hotel we sat down at the hotel bar and enjoyed a couple of drinks and talked to the bartender for a while. 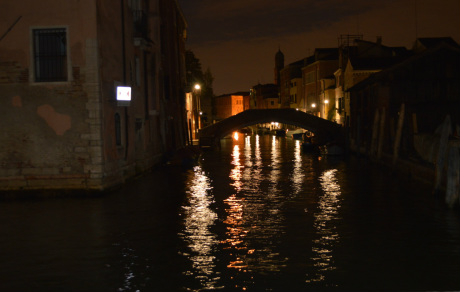 We woke up today with a full day ahead of us!  We hit all the major historical points of Venice -  the Rialto Bridge, Marco Polo Square, Santa Maria Church, which is unreal, definitely a Venice must see.  We ended up venturing back into Dulsodoro and grabbed lunch in one of Venice's famous snack bars, Piccolo Martini.  They had an amazing selection of sandwiches, this was for sure one of Jonathon's favorite eats in Italy.  We then continued to walk around finding a few shops for some mementos at.  We ended up at the Peggy Guggenheim Collection.  She had an amazing collection of contemporary art, and it was a life time opportunity to see the works of Andy Warhol, Picasso and many more in person!  After that we grabbed some gelato and headed back to the hotel for a nap before dinner!

When we woke up we thought it would be a good idea to eat in San Marco square and enjoy the beautiful evening scenery, but boy were we wrong!  We ate at a horrible restaurant called Cafe Eden, and we would never recommend that place!  It was overpriced, horrible quality, and horrible service.  After the very disappointing dinner we wandered around the area behind the square and found many affordable shops! 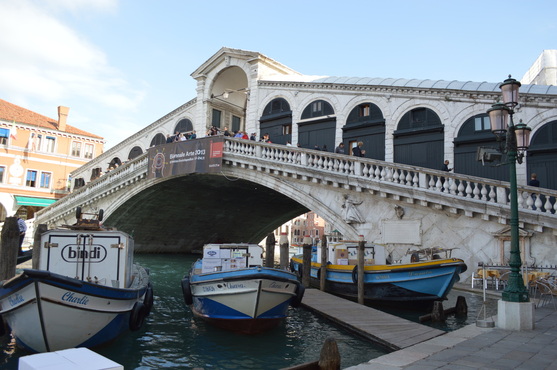 Rialto Bridge
October 3, 2013
Off to Florence

We woke up this morning and went out to some of the shops we found the night before!  Jonathon bought a cashmere blend scarf and we both got a pair of leather gloves!  We also took a last minute stroll around St Mark's Piazza and found a very popular tea shop, Florian,  and we picked up a package of amazing  chocolate covered espresso beans!  After shopping it was time to head to the train station.  It was a very cold day in Venice, we learned that we did not pack right for Italy!  Venice was very chilly and we did not have enough layers to add on!   And it was off to Florence we went, in hopes of warmer weather!
Powered by